The ultimate in customizing your board.

How a new custom one-off came to life:

How a new custom one-off came to life: Something unique that we offer is the ability for anyone from anywhere (you don’t have to be a pro or have a special ‘in’ with the shaper), but ANYONE can present their own ideas for what they would like to have made. There are no restraints, no limitations, no parameters. I find it very American. You are not stonewalled or censored or told what you must ride. You are given the opportunity to choose what you feel will be best for you and your experience. You are not locked into choosing from just the board models or sizes / dimensions offered. Although the proven board models are always a trusty way to go since a great deal of time and testing has gone into developing something reliable and dynamic. But you can also use aspects of these proven board models as jumping off points. To mix and match the raw material to begin your own journey of design.

And I am there to help you along your journey. We have the “Concept” board category where you can bring your ideas to bare and I help to bring your vision to reality by applying what will actually work; sifting through the bits that won’t; refining the ideas, filtering and synthesizing the design aspects with you. Some ideas start like this one  as a quick sketch on a scrap of paper. 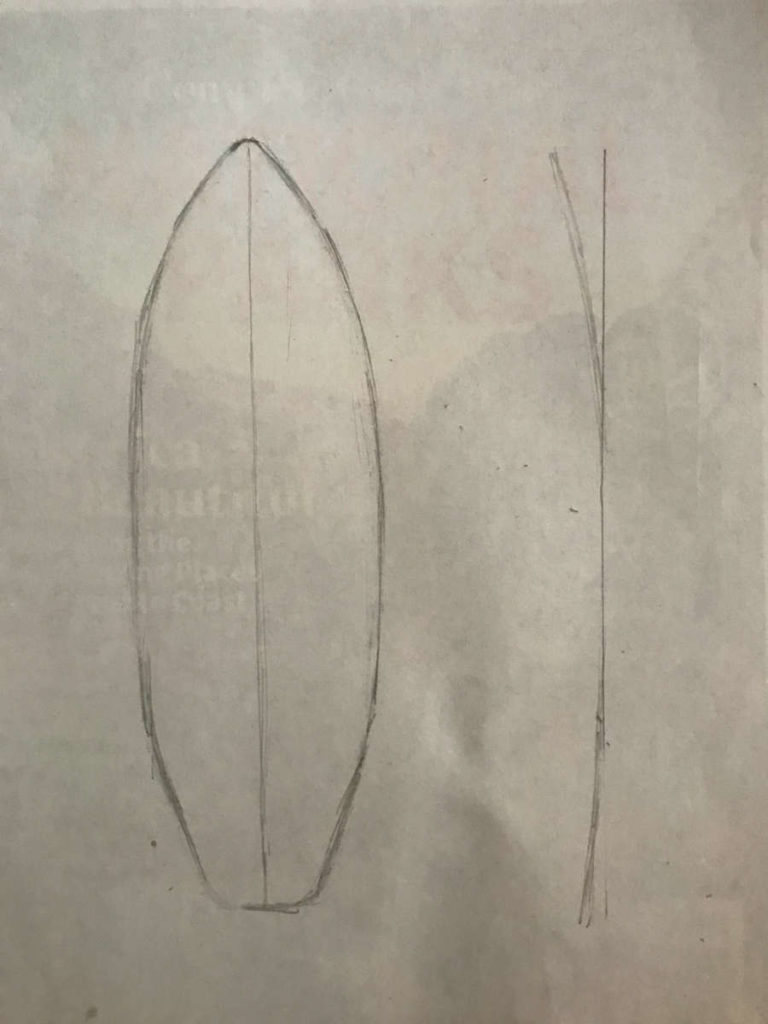 A surfer named Edwin sketched out this puppy and said, “I want a fun board for Malibu when it’s just ok. I have a fish, so I want it kinda like a fish up front for glide speed, but I don’t want a wide tail. I want a steep hip like an old Tom Curren 80’s tail so it stays snappy and pockety. I want flat to slight shallow single to double concaves and a flip nose that is thinned out and flatter on the deck side…I like the look of a nose like that when I’m paddling. I want it to be fast yet responsive in weak waves. And I want it to be light but strong and epoxy with light gray rails.”

– That’s where my part as the shaper comes in…So I took the #Zipstitchsurfboard rocker and put a #Rascalsurfboard outline on it. Then pulled a steep hip at the 15” mark off the tail block, slightly widened the tailblock and squashed it up from the standard Rascal swallowtail. Then I backed the normal jetstream concaves typical to the Zipstitch and made them into shallow traditional single-to-double concaves. The nose is thinned out and flipped. It’s made in ridiculite epoxy construction with strategic carbon reinforcement in the key spots…and light gray rails.

*(Due to a more in-depth consultation, the concept board process does include an additional design charge for the time involved to bring the ideas to life.)